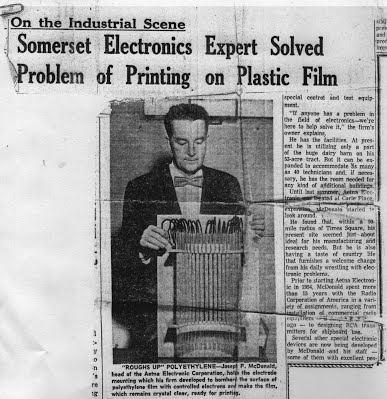 Corp. of Readington Rd. North Branch. As a result of a process developed by Joseph F. McDonald, head of the firm, it is now possible to print on the plastic bag you get from the cleaners, the plastic sack in which vegetables are packed, or any number of items using polyethylene film. It was about six years ago that McDonald was approached by plastics manufacturers who posed this problem. "We're having trouble printing on polyethylene sheets or tubes. What can you suggest?" McDonald studied existing equipment, learned its defects and came up with a system utiliz­ing the long-known "corona effect" literally a series of tiny sparks that roughen the surface of the plastic so it will hold ink. Voltage as high as 18,000 are used in the equipment.


Among other things, McDonald overcame major obstacles of similar equipment double handling of the plastic material, maintenance and performance problems and "burn through ' handling plastic film up to speeds of 100 feet per minute. Only two other firms make comparable equipment, so Aetna is an important contributor in its particular field in this country. But it also Ships its equipment to many nations overseas — prac­tically all European countries, Brazil, China, Japan and South Africa. Last year sales of this particular item totaled about $50,000.

A second product of the Aetna shop located in the former dairy barn of the old Higgins farm off Rt. 22 is a much more complex but important de­vice known as a "servo analyzer." A simplified and modernized version of a similar device al­ready on the market, it is used for checking the operation of servo systems. These are the electronic Systems which enable distant or remote control of other devices. "Power steering is actually a form of a servo system," McDonald explains, pointing out that a light touch on the steering wheel actually controls the power needed to turn the wheels of an automobile. Similarly, the many instruments in a plane's cockpit control rudder, elevator, tail fins or other motors, rudder, elevator, tail fins or other parts important in flight. Through servo systems — which may also be coupled into control devices—all important plane func­tions can be at the pilot's finger tips; even though they may actually involve relatively high operating forces. The servo analyzer made by Aetna is used to check the performance of the control systems. It can also be used in the operation of -computers and other complex electronic, circuits and devices.

McDonald and a staff of six specialists also produce a num­ber of other rather specialized devices for the electronics field, radio transmitters and electronic generators for research and in­dustrial applications, high voltage D. C. and RF. generators; heavy duty variable inductors, capacitors and R.F. chokes, special iron cores for power use and other special control and test equip­ment. "If anyone has a problem in the field of electronics—we're here to help solve it," the firm's owner explains. He has the facilities. At pres­ent he is utilizing only a part of the huge dairy barn on his 53-acre tract but it can be expanded to accommodate as many as 40 technicians and if needed it could be expanded in any of four other buildings.

Until last summer, Aetna Electronics was located in Carl Place Long Island. When he needed additional space he began to look around within a 50 mile radius of Times Square. His present site seemed just about ideal for his manufacturing and research needs. But he is also having a taste of country lifethat furnishes a welcome change from his daily wrestling with electronic problems.

Prior to starting Aetna Electron­ic in 1954, McDonald spent more than 15 years with the Radio Corporation of America in a variety of assignments, ranging from design of commercial radio equipment to designing RCA transmitters for shipboatd Use. Several other special electronic: devices are now being developed by McDonald and his staff . some of them with excellent possibilities for the future.

But for the present the electronic treaters and the servo analyzers being produced by Aetna are playing an important part in the respective fields in which they are employ­ed — another instance of the Twin County area's contribution to the nation's economic and technical growth.